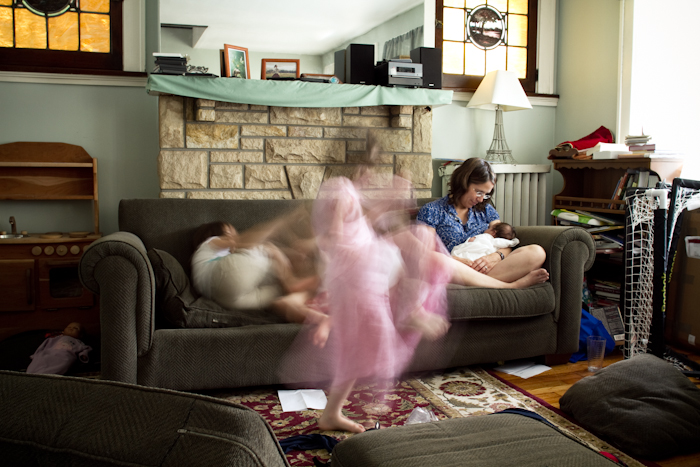 You may have heard it said that after you have three, adding more is not a big deal – just throw them into the already occurring melee. I’ve had four kids for seven weeks now and so far, that has not been my experience. There are four kids to keep safe and fed and intermittently happy. That’s a job. But the baby – she’s the easy part.

To show my childrens’ motion I used a long exposure.  The shutter was open for two seconds.  In a typical photo, the shutter is opened for not more than 1/60 of a second (usually more like 1/250 or 1/500) – much faster.  I tried a few different shutter speeds to figure out what would produce enough blur to show motion but not so much that you couldn’t see the kids.

I recently bought a 20mm lens and it is a very different lens for me.  I usually use a 50mm and 100mm.  Instead of bringing the subject in close, the 20mm gives a wide view.  For this photo, I was happy to have that lens.  It is good lens for seeing a whole messy scene.