The First of Many LossesWe were at a family picnic and my niece, Makenna, lost her first tooth.  She was happy about it.  My sister asked if I could take a picture of her with just the tooth in focus. 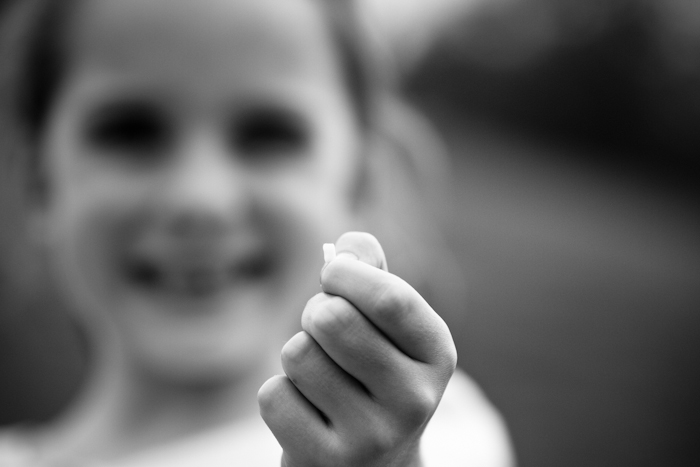 I took Makenna outside the party tent for the photo.  The light was better there and the background would be less distracting.  I took this photo and wanted to try another one with her face more in focus.  Before I could do that, the tiny tooth slipped out of her fingers into the gravel she was standing on.  We looked for it and found many little white rocks but no tooth.

Her mother saw us looking around and knew what had happened.  She sighed.  It was her first child’s first lost tooth.  “At least we got a picture of it,” I said weakly.

This got me thinking.  As a mother who photographs her children almost daily, I wonder how the recording of moments changes the moments themselves.  A lost baby tooth is not the end of the world, I know.  But, it is funny to think that Makenna’s memory of losing her first tooth won’t be about hiding it under her pillow, but about dropping it when I was taking her picture with it.